After a shout-out from one of the Internet’s superstar vloggers, Natasha “Tash” Zelenka finds herself and her obscure, amateur web series, Unhappy Families, thrust into the limelight: She’s gone viral.

Her show is a modern adaptation of Anna Karenina—written by Tash’s literary love Count Lev Nikolayevich “Leo” Tolstoy. Tash is a fan of the forty thousand new subscribers, their gushing tweets, and flashy Tumblr GIFs. Not so much the pressure to deliver the best web series ever.

And when Unhappy Families is nominated for a Golden Tuba award, Tash’s cyber-flirtation with Thom Causer, a fellow award nominee, suddenly has the potential to become something IRL—if she can figure out how to tell said crush that she’s romantic asexual.

Tash wants to enjoy her newfound fame, but will she lose her friends in her rise to the top? What would Tolstoy do?

END_OF_DOCUMENT_TOKEN_TO_BE_REPLACED

This is a three week long readathon, which does give me a little more room to breathe, especially since the first week overlaps with BookTubeAThon. It runs from 24th July – 14th August. I’m so glad that this readathon spans longer than a week, I feel like there will be a lot less pressure about it.

END_OF_DOCUMENT_TOKEN_TO_BE_REPLACED

I mentioned this readathon in my July TBR but wasn’t able to say when it was, what the challengers were and what my TBR was for it.

END_OF_DOCUMENT_TOKEN_TO_BE_REPLACED

A book blogger meme hosted by Bookshelves and Paperbacks blog where the three main categories are:

END_OF_DOCUMENT_TOKEN_TO_BE_REPLACED

This is a series review for the Gives Light series by Rose Christo. It is six books long so far, with the seventh book in the works (date TBA). It is a series about sixteen-year-old Skylar who was left mute after the serial killer that killed his mum discovered he had a witness. His father, who is Native American from the Shoshone tribe, goes missing and Skylar goes back to the reservation to live with his grandmother. There he makes friends and falls in love with a boy on the rez.

END_OF_DOCUMENT_TOKEN_TO_BE_REPLACED

Vanessa Mazur knows she’s doing the right thing. She shouldn’t feel bad for quitting. Being an assistant/housekeeper/fairy godmother to the top defensive end in the National Football Organization was always supposed to be temporary. She has plans and none of them includes washing extra-large underwear longer than necessary.

But when Aiden Graves shows up at her door wanting her to come back, she’s beyond shocked.

For two years, the man known as The Wall of Winnipeg couldn’t find it in him to tell her good morning or congratulate her on her birthday. Now? He’s asking for the unthinkable.

What do you say to the man who is used to getting everything he wants?

END_OF_DOCUMENT_TOKEN_TO_BE_REPLACED

I’ve been seeing this tag all over Booktube and then Thrice Read did a post on the tag and I realised that at the end of June, it wouldn’t be mid-year anymore. Then Birdie Bookworm tagged me and I knew I had to do it!

I tag anyone who is reading this and hasn’t yet done this tag!

END_OF_DOCUMENT_TOKEN_TO_BE_REPLACED

So, I’m travelling and working on Camp Nanowrimo during the month of July. The travelling has been stressful so far (NEVER book a flight at 7am on a Sunday unless you have someone who can drive you to the airport free of charge). I have plans to do Fairyathon which lasts the whole month and Booktubeathon which is at some point during the month (no intro video up so far), but mostly I’ll be focusing on ARCs and library books.

END_OF_DOCUMENT_TOKEN_TO_BE_REPLACED

So, this was a busy reading month for me. I took part in six readathons, which would be absolutely fine if they didn’t all overlap. Emojiathon and The Annual Harry Potter Readathon were set for the month and I had seven books in total for those readathons. But then I went a little reading challenge mad and I signed up for Read-O-Rama Readathon, Library-a-thon, Because Dragons Readathon and Alphabethon. All of them lasted a week and the Because Dragon RAT started two days later than the other two. I had great fun reading all those books I have been meaning for a while but I’m going to try and not do it again. Because I gave myself seventeen books to read in a little over a week (while working at the same time) and then wondered why I didn’t get anything done. Good thing the internet was screwy the whole week so I really didn’t have anything to do.

END_OF_DOCUMENT_TOKEN_TO_BE_REPLACED 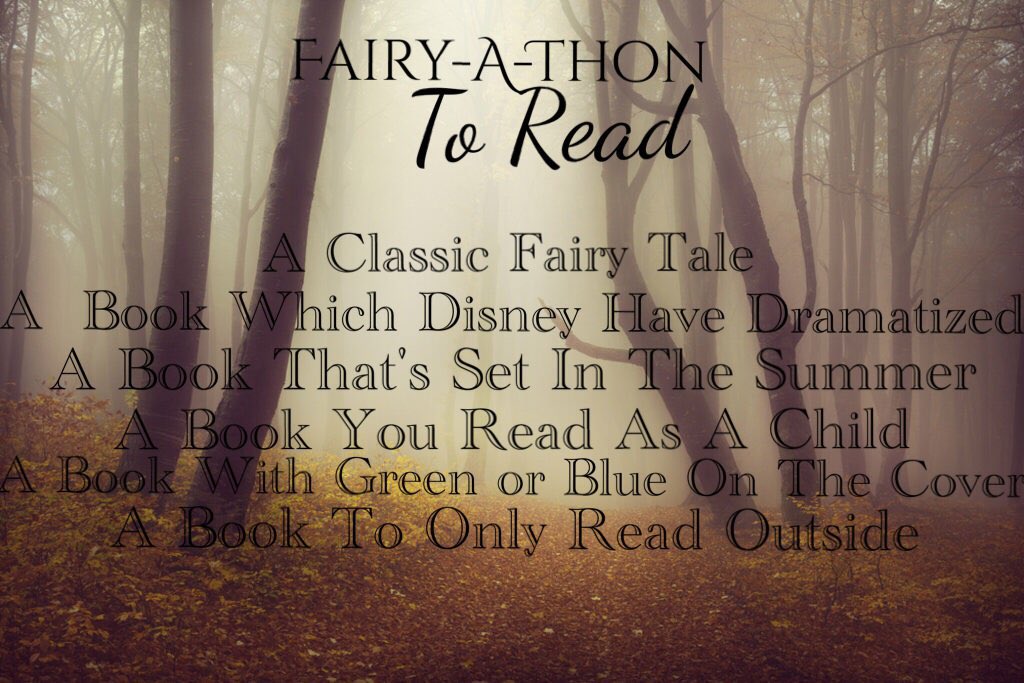 This is a brand new readathon (Twitter here) which is fairy and summer themed! This readathon runs for the month of July and the challenges are listed above in the picture. For those people who can’t see the picture:

The outside challenge will be interesting considering I’m in Australia where it’s winter but I’ll have a go.