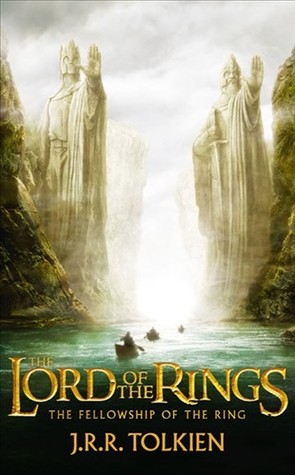 Continuing the story begun in The Hobbit, this is the first part of Tolkien’s epic masterpiece, The Lord of the Rings, featuring an exclusive cover image from the film, the definitive text, and a detailed map of Middle-earth.

Sauron, the Dark Lord, has gathered to him all the Rings of Power – the means by which he intends to rule Middle-earth. All he lacks in his plans for dominion is the One Ring – the ring that rules them all – which has fallen into the hands of the hobbit, Bilbo Baggins.

In a sleepy village in the Shire, young Frodo Baggins finds himself faced with an immense task, as his elderly cousin Bilbo entrusts the Ring to his care. Frodo must leave his home and make a perilous journey across Middle-earth to the Cracks of Doom, there to destroy the Ring and foil the Dark Lord in his evil purpose.

I finally, finally got around to this book. I’ve had a copy of this around forever, probably my entire life, and while I had really enjoyed the films, I kept trying the books and finding myself getting stuck halfway through the Fellowship on the Tom Bombadil bit. Then I listened to it on audiobook, which made the songs a lot easier to read, and I finally managed to finish it. This review is going to have a lot of spoilers in it because I don’t think there is a person alive who doesn’t know the basic plot, though I will try and avoid particulars.

I have to admit that I am biased towards this book considering how much I loved the films. If I had read this book without knowing anything about it, I would probably have a few less than favourable things to say about this book and I would have probably rated it a lot lower than I did.

Tolkien really loved Middle Earth and he showed it, veering off the main plot to chat about hobbits and elves and the world itself. Some of these things were interesting, like what it had about Bree, but Tolkien has a fascination with elves and it shows. The first time we meet an elf, they show up laughing and saying they don’t want to talk to hobbits because they’re boring – not a great first impression but it’s obvious the narration favours the elves. However, I loved the hobbits and have ever since I first watched the film. Out of all the races in Middle Earth, the hobbits are the ones you get to know the most and the narration about them is so fond, making it obvious that while hobbits don’t like outsiders, they also wouldn’t leave someone to starve on the doorstep. I loved the part with Farmer Maggot and the hobbits because it just showed that despite the fact he hadn’t seen Frodo since he was stealing his mushrooms, he gave them a hot meal, food to take on their way and then took them down to the ferry, despite his fear of the Nazgul. It was such a little scene but it was so lovely as well.

The plot, when it got moving, was nicely paced and I loved seeing the description of the fellowship for this point of view. The Tom Bombadil bit I think dragged on a little, the audiobook really with the variety of songs that showed up in those chapters, and I feel like Tolkein really loved his creepy forests because they show up a lot. The characters themselves I didn’t mind, but I feel like Bombadil could have shown up at the Council of Elrond (where there was yet more talking) and we would have been able to deal with that.

I love how each of the fellowship were slowly developed, especially Boromir (which should be an indicator of what was going to happen to him) and I can’t wait to see their characters being further developed. A few things Tolkien brushed over but I would have loved to see more of, like Aragorn and Arwen and how Gimli and Legolas became friends. I’ve still got the next two books to read so I’m really looking forward to it.

The descriptions were gorgeous and I am beyond impressed by the world-building. It’s absolutely amazing and I’m so glad I bought the other books Tolkien wrote about Middle Earth, which is my next project after the Lord of the Rings.

This is definitely a book I’m going to reread. 4.5 stars!