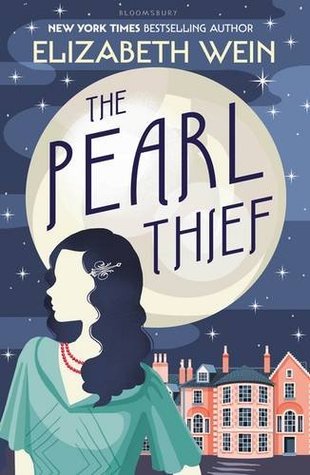 Sixteen-year-old Julie Beaufort-Stuart is returning to her family’s ancestral home in Perthshire for one last summer. It is not an idyllic return to childhood. Her grandfather’s death has forced the sale of the house and estate and this will be a summer of goodbyes. Not least to the McEwen family – Highland travellers who have been part of the landscape for as long as anyone can remember – loved by the family, loathed by the authorities. Tensions are already high when a respected London archivist goes missing, presumed murdered. Suspicion quickly falls on the McEwens but Julie knows not one of them would do such a thing and is determined to prove everyone wrong. And then she notices the family’s treasure trove of pearls is missing.

I have finally finished this book! I’ve owned a copy of The Pearl Thief for so long and I’ve been meaning to read it before continuing on with the series but never got around to it until now. I listened to half of it on audiobook and the other half I finished reading in paperback. I loved both ways of reading it, the audiobook was a delight, but I can read much faster than listening so I finished it off in hard copy.

The Pearl Thief is the prequel to Code Name Verity where we get to see Julie’s last summer at Strathfearn, her grandfather’s estate. She goes through the summer mourning her grandfather and her loss of the familiar as well as being embroiled in a mystery as soon as she gets home.

Even if I did once spend three months demnading that everyone in the household call me Davie (they might have been more indulgent if it had not also been my eldest brother’s name), I don’t expect to be recognised when I’m in drag as one of my favourite literary obsessions.

Julie is a completely delightful character. It’s been a while since I read Code Name Verity and I want to rectify that soon enough, but in this book I loved Julie as a main character. She is delightful and engaging and just so flawed at the same time. She is privileged and ignorant at times but in a way that you can see she will grow out of it as she gets more experience with the world around her. I love how completely accepting she is of the fact she likes both a man and a woman in this book and doesn’t look down on herself for it, though she knows to not advertise it. I loved seeing all the characters that came up in CNV and got to explore their characters even more. I loved Ellen, Euan and Jamie and how the four of them became good friends over the course of the book.

It took every fibre of my being not to scream at him: WHAT ABOUT MARY QUEEN OF SCOTS’ PEARLS, YOU SNEAKING WEASEL?

The plot was a great mystery as Julie tries to work out what happened to her the day she returned home and was struck over the head. As small parts of her memory come back, Julie does a little poking around to stop her friends being blamed for what happened to her. I loved the twist and turns of the plot, though I did guess the involvement of one person, and how everything didn’t work out perfectly in the end but the truth was found out by the end.

This book was a delightful prequel, exploring the beautiful setting of Scotland, and exploring pre-existing characters without invalidating the events of CNV. It has a very different feel to it than CNV, considering it was written in a different style and focused on a much slower plot, but it was a joy to read and I would recommend it.