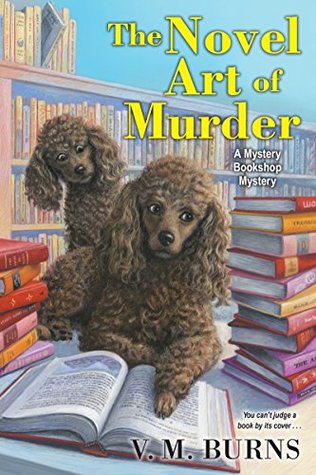 The small town of North Harbor, Michigan, is just not big enough for the two of them: flamboyant phony Maria Romanov and feisty Nana Jo. The insufferable Maria claims she’s descended from Russian royalty and even had a fling with King Edward VIII back in the day. She’s not just a lousy liar, she’s a bad actress, so when she nabs the lead in the Shady Acres Senior Follies—a part Nana Jo plays every year in their retirement village production—Nana Jo blows a gasket and reads her the riot act in front of everyone.

Of course, when Maria is silenced with a bullet to the head, Nana Jo lands the leading role on the suspects list. Sam’s been writing her newest mystery, set in England between the wars, with her intrepid heroine Lady Daphne drawn into murder and scandal in the household of Winston Churchill. But now she has to prove that Nana Jo’s been framed. With help from her grandmother’s posse of rambunctious retirees, Sam shines a spotlight on Maria’s secrets, hoping to draw the real killer out of the shadows . . .

I requested this book from NetGalley because I had enjoyed the first book in the series and I always love books set in bookshops, especially when they’re cosy mysteries. I haven’t read the second book but I didn’t find this a detriment to reading this book at all.

In this book, Sam and her grandmother, Nana Jo, are back to solving crimes when someone in Nana Jo’s retirement home/village gets killed and she is blamed for it. This time they have some surprising allies, as well as some more exploration of the group of Nana Jo’s friends, especially when someone else gets killed.

Like with the first book, I enjoyed seeing Sam’s relationships with the people around her, like with Nana Jo, her mother and Frank, the love interest. It was interesting to see such a great variety between them, especially her grandmother and her mother. The latter’s relationship with Sam is very complicated and you could tell the love was there for Sam, even when her mother drove her up the wall. I liked seeing more of the bookshop in this book as well, how it runs and the different events Sam sets up and how she ends up fitting more into the community.

I do love seeing that kind of small town feel, even if it not necessarily a small town as such, with intersecting relationships and community events set up where you meet people who you either know or they know someone you know. Having that running along the murder mystery plot was very realistic and I enjoyed it. The actual murder mystery was one I enjoyed as well. I guessed the murderer quite early on and I was a little surprised how no one really considered them as the murderer until right before the reveal, but I did find the reasoning behind the murder even more interesting.

However, there was the same problem in this book as there was in the first book. Sam is very secondary to solving the mystery really, it’s far more on Nana Jo and her friends who are doing all the work. It wasn’t quite as bad as it was in the first book but it was clear enough that I was wondering why Sam was the main character when it was clearly Nana Jo who was the driving force behind the mysteries actually getting solved. And, again, with Sam writing her book and the mystery mirroring what was going on in real life, it could be hard to keep track of two casts of characters, especially when it switches between chapter and chapter.