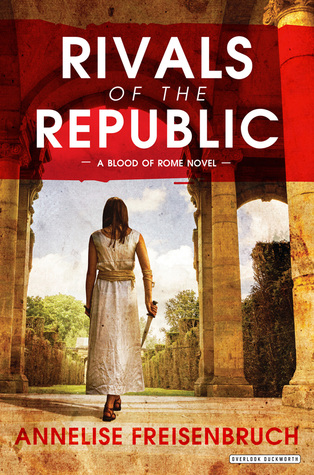 The body of a Vestal Virgin is found in the Tiber River, and soon after, A senator is found having bled to death in his bath. And as Roman authorities turn a strangely blind eye, Hortensia, the daughter of the capital’s most celebrated orator, begins investigating this trail of murders that leads straight into the dark heart of Rome.

Despite her husband’s and father’s attempts to protect her and rebelling against the societal constraints to her sex, Hortensia plunges deeper into the corrupt underworld of the city. And only one man can save her from becoming the next victim: Lucrio, the ex-gladiator to whom she already owes her life. But Lucrio has secrets as well, and his past threatens to subsume both him and Hortensia.

I got this book from one of the book boxes ages ago and it sounded like something I really wanted to read, so, of course, I didn’t read it for nearly two years. That said, I found this book delightful and I am definitely going to keep an eye out for more books in this series.

This book is a historical murder mystery. Hortensia is the daughter of one of Rome’s great orators and has inherited his skill with speaking. Through circumstances, she manages to get herself involved in solving the murder of a Vestal Virgin (a priestess) and finds it links to a greater conspiracy than she had ever thought.

The two main characters are Hortensia and Lucrio and we switch between their POVs (as well as sometimes diverting to the villain’s POV occasionally). Hortensia is young (she is seventeen when the story starts), intelligent, willing to put herself into danger for the truth and just a little too cocksure at times (it is what leads to a tricky situation near the end of the book). Lucrio is very focused on his revenge, which both helps and hinders the investigation and he is also a very good warrior. Hortensia and Lucrio strike up a strange friendship – Hortensia saved him from being killed in the gladiator ring and she earns Lucrio’s loyalty by not standing in his way when it comes to his revenge, as well as other events in the book. They are wonderful characters to read about and I was fully invested in both of them.

The side characters were interesting enough but they were definitely there to serve their purposes as side characters. Hortensia’s husband seems amicable enough and I did like how he did not try to stifle Hortensia when she wanted to speak up for another woman, just warned her about considering the consequences. With a marriage like that, where her husband was older than her, it could have come across as him condescending to her but thankfully we didn’t really see any of that. I was not a fan of Hortensia’s father, despite how much she admired and loved him, and we still see some of that pedestal crumple by the end of the book.

The villain was a delightful one. Smart, cunning and far too willing to kill to get rid of his opponents, this all made the ending very satisfying. I liked seeing a glimpse of his motivation at the end because it was a very sympathetic motivation but he was still a horrible person. And that ending! No neat little bow, it’s all still complicated but the main mystery is wrapped up.

The plot was a little slow-moving at times but I think my preconceived ideas about this book, as mentioned above, held me back more than anything else. But I found this a very well-written book and I loved the historical context we got at the beginning of the book so it helped to set the scene for us. This definitely leans on the more historical side than the murder mystery side, but I really enjoyed how the setting and the time played a huge part in this story.